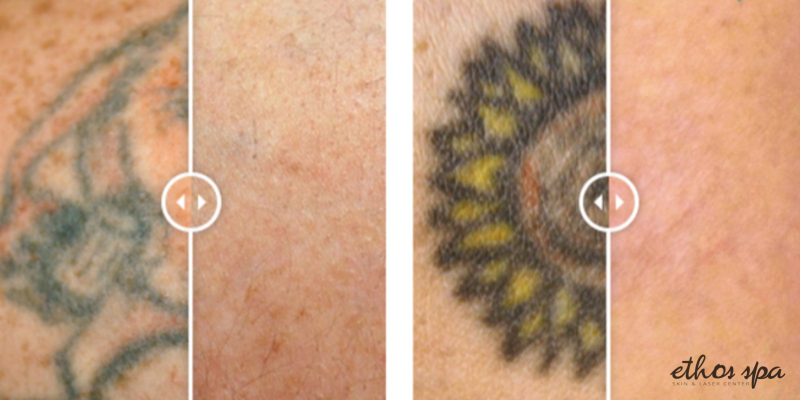 Old vs New Tattoo Removal: Which Is Easier To Remove?

Tattoos are meant to stay on the skin forever. But there are lots of people who are eventually hit with tattoo regret and want to have their tats removed. Just like when you first get one, there are also several things to consider when erasing an unwanted tattoo. It’s important to consider the tattoo’s color, location, size, and age.

Is it Easier to Remove Older Tattoos?

Around 36% of Americans aged 18 to 29 have at least one tattoo in different parts of their body. Although the process of getting inked is a painful one, many people still ought to express themselves through this popular form of body art.

However, some people eventually change their minds about their tattoos and find different ways to have them erased. Laser tattoo removal procedures are quite common because they work quicker than tattoo removal creams. They also offer permanent results without the huge risk of scarring that tattoo excision surgeries have.

Why Are Older Tattoos Easier to Remove?

Although old and new tattoos are both made of the same ink particles that are broken down during the removal procedure, older tattoos are easier to erase because of these two factors:

Tattoos eventually fade the more they’re exposed to the sun. Direct sunlight breaks the ink particles slowly. Laser tattoo removal machines work in the same way, but the sun takes its time to fade the tattoo.

Sitting out in the sun won’t erase the tattoo completely so don’t attempt to stay outside just to get rid of an unwanted tattoo. The sun is more likely to damage the skin than work as a tattoo removal method.

Older tattoos have already had enough sun exposure that caused the original colors to fade. The sun has already managed to destroy some of the ink particles on the patient’s skin, which is why laser tattoo removal procedures for older tattoos take a lot less time and effort.

The body rejects any foreign substance it detects to keep itself healthy. Ink particles are considered a threat to the body, which is why it tries to remove the tattoo little by little. Although the body doesn’t automatically reject the injection of a new tattoo, it slowly attacks the ink particles until the color becomes worn down over time.

However, the body can’t erase the tattoo by itself. Laser tattoo removal done by professionals breaks down the tattoo ink particles so that the body easily absorbs and flushes them out. Like sun exposure, body rejection has already eliminated some of the ink particles from older tattoos. This makes it easier for laser technicians and the laser removal machine to erase unwanted tattoos quickly and effectively.

How Many Laser Removal Sessions Does My Tattoo Need?

Although they offer permanent results, laser tattoo removal procedures are not instant. Dermatologists require their patients to undergo multiple laser removal sessions to get rid of their unwanted tattoos completely. Laser tattoo removal usually takes around 5 to 10 appointments, but the exact number of sessions depends on different factors like the tattoo’s size, location, and colors.

The age of the tattoo also affects the number of laser removal sessions needed to erase it. New tattoos are required to undergo more laser removal appointments because there are still a lot of ink particles to break down.

One way to ensure a quick laser tattoo removal for new tattoos is to find a powerful device like PicoSure laser. This powerful machine works on all tattoo colors and skin types. It even works well to erase a new tattoo as soon as it’s healed. PicoSure laser only requires a 2–4-week gap between treatments, while Q-switched lasers need 6-8 weeks.

How Long Before I Can Get Rid of My Tattoo?

Many people with tattoos that they got as a mistake or as a “spur-of-the-moment” decision are almost always instantly hit with tattoo regret once they see the design. However, people shouldn’t get their tattoos removed as soon as they got inked.

Tattoos are drawn on the body using injections that puncture the skin around 3000 times per minute. The skin traps the ink so that the design stays there for a long time. However, this process traumatizes the skin, leaving it bruised, swollen, and punctured for some time.

Clients must wait until their skin has completely healed from the tattoo application to start laser tattoo removal sessions. This process usually takes around 6 to 8 weeks. Remember that aftercare tips for getting a tattoo should still be followed to prevent scars from forming.

Should I Still Have My New Tattoo Removed?

Tattoos are meant to be permanent, but there are a few ways to get rid of them if they’re something you don’t want on the skin anymore. Before doing anything to the new tattoo, it’s important to let it fully heal first. The skin is still “traumatized” from when the tattoo was created, so it’s best to let it rest first to avoid complications like hyper or hypopigmentation.

Here are two other options to fix a new tattoo without removing them completely:

Laser Removal for All Kinds of Tattoos at Ethos Spa

Here at Ethos Spa, our highly trained staff are experienced in using the PicoSure laser system – the gold standard in laser tattoo removal technology. This device ensures a safe and effective tattoo removal that works on different ink colors and skin types.

The laser tattoo removal procedure at Ethos Spa starts with a consultation with our experts to help them design the best treatment plan for each client. Call us at (908) 628-1916 to schedule an appointment.

Read more: Why Is Your Laser Tattoo Removal Not Working?

Why Is Your Laser Tattoo Removal Not Working?

Got unwanted tattoos on your body? Laser tattoo removal is the best method to get…

Laser tattoo removal is generally a safe process. However, it can be complicated and difficult…

Mistakes are an ordinary part of life, but a tattoo you no longer like is…

Tattoos have always been a popular form of self-expression, but recent developments have elevated tattoos…

7 Worst Place to Get Tattoos

Tattoos are a great way to express yourself. Aside from the endless designs to choose…

How Can I Remove My Permanent Tattoo Without Laser?

Laser tattoo removal is the most common way to get rid of a tattoo. However,…