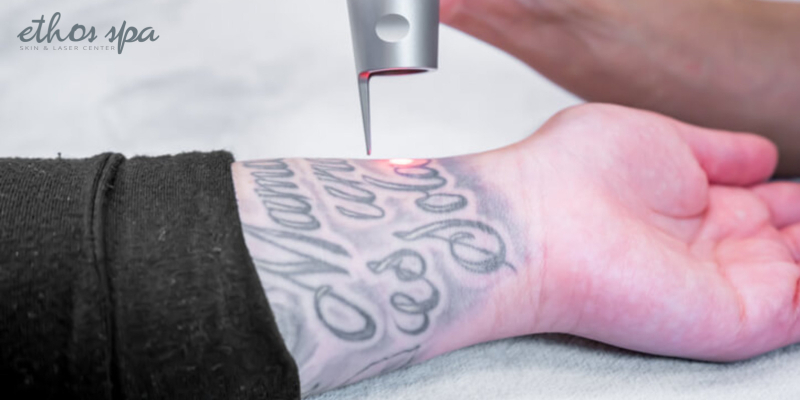 Why Is Your Laser Tattoo Removal Not Working?

Got unwanted tattoos on your body? Laser tattoo removal is the best method to get rid of the ink on the skin. Although it’s an effective procedure for the most part, there are times when the tattoo still remains even after multiple laser removal appointments.

So why is laser tattoo removal not working for you? There are plenty of possible reasons why a laser treatment can’t get rid of the tattoo on the skin, but it’s mostly because of the type of laser used and its wavelength. Other reasons might be the inexperienced laser technician and the age of the tattoo.

Tattoos are the oldest form of body art that’s still popular today. It’s a great way for people to express their personalities. In the US, around 36% of people aged 18 to 36 have at least one tattoo on their body.

But even if more and more people get tattooed every year, there are also others who find ways to remove old or unwanted ones. About 11% of Americans with tattoos have planned to remove at least one of their tattoos in 2017.

Laser tattoo removal remains the most popular way to get rid of tattoos. It’s a lot more effective than tattoo removal creams and other home remedies that claim to fade the ink on the skin. Laser removal utilizes high-energy lasers to break down the ink particles on the skin so that they’re eventually flushed out by the body.

Laser tattoo removal is an FDA-approved method to eliminate unwanted tattoos. If it’s not working for you, here are four possible reasons why:

PicoSure lasers are powerful devices that deliver rapid pulses of light to the treatment area in as fast as a trillionth of a second. Traditional Q-switched lasers are effective in sending photothermal pulses to heat the skin and surrounding tissues, but PicoSure’s photomechanical technology is more efficient in shattering the tattoo particles.

Patients who used PicoSure lasers for tattoo removal also reported fewer required treatments and shorter recovery times. The laser is also effective in erasing hard-to-remove ink colors like green and blue. It’s safe to use in different body parts that have already been treated with a laser before.

Laser tattoo removal works by delivering light energy into the tattooed skin. The ink particles absorb this energy, which causes them to shatter into smaller fragments that eventually get flushed out by the body.

However, different colors only absorb and reflect different light wavelengths – a red-colored tattoo can’t be removed with red laser light because it doesn’t absorb any of the energy. If the tattoo ink can’t absorb much of the light directed from the tattoo removal device, the particles won’t shatter and the tattoo won’t be erased.

Here are some of the common wavelengths used for laser tattoo removal:

Like with any cosmetic procedure, the provider’s skill directly affects the success of the treatment. Even with the right laser type and wavelength used, a tattoo won’t be removed if the inexperienced technician keeps on treating the same area for too long. This activity is dangerous for the skin because it damages the skin cells and results in scars and burns.

A highly-trained doctor, like our staff at Ethos Spa, knows how to use the device to their advantage. They only apply the right amount of laser pulses to the treatment area to ensure a safe and effective tattoo removal procedure.

4. Age of the Tattoo

Aside from the ink’s color, another thing to consider before getting the unwanted tattoo removed is its age. Older tats are easier to remove than new ones because of two reasons:

Get Rid of Unwanted Tattoo at Ethos Spa

Here at Ethos Spa, we help clients say goodbye to their unwanted tattoos in the most efficient way possible. Our highly trained staff are experienced in using the PicoSure laser system to remove tattoos safely and effectively.

The PicoSure laser system is considered the gold standard in laser tattoo removal technology because it sends ultra-fast light pulses to break down the ink particles. It also works on all tattoo colors and skin types.

Learn more about laser tattoo removal here at Ethos Spa by visiting our website or calling us at (908) 628-1916.

Tattoos have always been a popular form of self-expression, but recent developments have elevated tattoos…

Old vs New Tattoo Removal: Which Is Easier To Remove?

Tattoos are meant to stay on the skin forever. But there are lots of people…

Laser tattoo removal is generally a safe process. However, it can be complicated and difficult…

Mistakes are an ordinary part of life, but a tattoo you no longer like is…

7 Worst Place to Get Tattoos

Tattoos are a great way to express yourself. Aside from the endless designs to choose…

How Can I Remove My Permanent Tattoo Without Laser?

Laser tattoo removal is the most common way to get rid of a tattoo. However,…

Check out the new Botox®/Filler packages with huge savings!