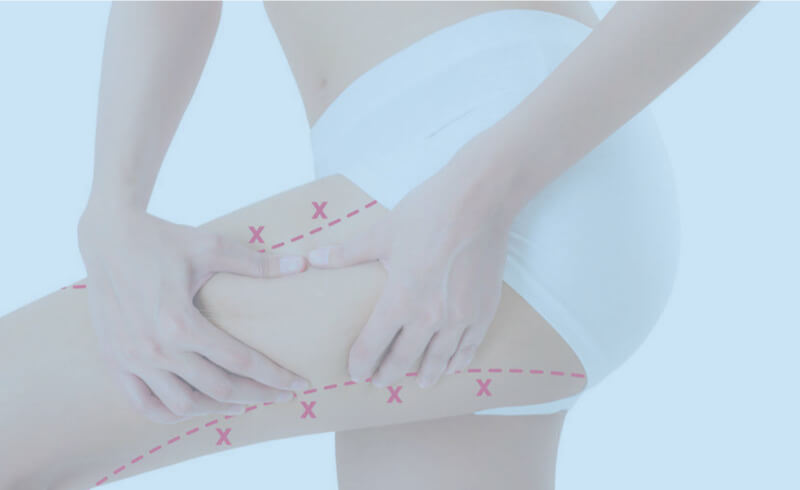 CoolSculpting on the Outer Thigh: Can I Get Rid of My Saddlebags?

No matter how much you might watch what you eat and exercise, you might still be dealing with an issue that many others deal with: stubborn fat deposits. And for many people – particularly middle-aged women – the most concerning area of stubborn fat is in the outer thighs, commonly known as saddlebags.

Thankfully, CoolSculpting is a great way to eliminate fat cells in stubborn areas. But does it work for saddlebags?

CoolSculpting is a new treatment developed over the last few years that utilizes a process known as Cryolipolysis, or the process that destroys fat by freezing it beneath the skin. CoolSculpting is used to treat stubborn deposits of fat, which can continue to trouble some people no matter how much they diet or exercise. But what causes stubborn fat?

Stubborn fat is more related to your natural genetics than anything else. Regardless of your weight, you generally have the same number of fat cells in certain areas of your body throughout your life. As you lose or gain weight, you do not necessarily lose or create new fat cells; instead, the fat cells in your body become smaller or bigger.

Areas with greater densities of fat cells tend to become stubborn fat deposits. This is why even those who are careful about their weight and exercise can sometimes struggle with unwanted pockets of fat. Since we all have unique fat storage, these stubborn fat deposits can vary from person to person.

How Does CoolSculpting Work?

Traditional weight loss techniques such as proper diet, cardiovascular exercise, and other methods offered by doctors and dietitians are effective at helping people lose weight, however, losing weight isn’t always the goal.

For some people – those experiencing pockets of stubborn fat – the intended goal of their weight loss is to make certain areas look better. However, weight loss isn’t always the best answer.

This is why CoolSculpting focuses on fat reduction (fat removal) rather than weight loss. Through the process of Cryolipolysis, stubborn fat deposits are permanently eliminated or ejected by the body. During the CoolSculpting procedure, a device is placed against the treated area (the type of CoolSculpting device used depends on the area to be treated). The device proceeds to freeze the fat cells beneath the skin, causing the fat cells to die.

After the fat cells die, the body sees the cells as waste, prompting the system to eliminate the dead fat cells. With fewer fat cells in the treated area, this leads to less fat cell density in the area of stubborn fat, leading to a slimmer and leaner look without any change in a person’s weight.

Saddlebags are a growing concern for many women of all ages, but exactly what saddlebags are can be slightly confusing. Saddlebags are sometimes confused with curves around the hips, but this isn’t necessarily the case.

Saddlebags can be found on the outer thighs, along the side of the butt cheeks. While women generally want their butts to have an outward, perky appearance, saddlebags extend the butt sideways, giving the backside an extra outer curve just below the hips. Saddlebags get their name from the saddlebags of a horse; when you look at a horse with saddlebags from behind, the saddlebags look as if they extend sideward out of the butt.

It’s important to remember that saddlebags aren’t necessarily a bad thing. There are some people who like the saddlebag or “square booty” look, as it is sometimes referred. This outer thigh fat is not everyone’s preference, however, and if you find yourself dealing with saddlebags even after proper diet and exercise, then it may be a case of stubborn fat deposits along your outer thighs.

Why Do I Have Saddlebags?

There are a few causes for saddlebags, such as muscular displacement, but for most people, saddlebags is a simple case of excess fat in the outer thigh region. Saddlebags is just another example of excess fat cells clumping up in a specific area, leading to the thicker and wider look.

As explained above, the way our bodies carry fat is unique and depends on our genetics, which is why some people may have saddlebags, and others with the same body weight may have fat in other areas.

Saddlebags are a specific kind of fat deposit that can be worsened by living inactive lives, and is commonly found in middle-aged women.

Thin or average weight women who naturally have round bottoms can find themselves naturally growing saddlebags as they age, as the fat cells continue to clump up in their outer thigh area. It is important to keep muscle growth and activity consistent in the outer thighs while maintaining a healthy diet.

How CoolSculpting Works on Saddlebags

For people who have a long history of dealing with saddlebags, CoolSculpting might be the best solution for you, because of the nature of saddlebags and how CoolSculpting interacts with the fat cells in the outer thighs.

CoolSculpting on saddlebags works by freezing the fat cells inside of the patient’s outer thigh area. As the outer thigh is generally a flat part of the body with a lot of skin, targeting the area with a CoolSculpting device is simpler and easier than other areas.

The outer thighs requires an applicator known as the CoolSmooth. The CoolSmooth is flat, making it better than round or curved applicators for areas of large flat skin that can’t necessarily be pinched. Areas that can be pinched include the abdomen and love handles.

CoolSculpting helps patients with saddlebags in two ways: by reducing the size and the curve of the saddlebags in the outer thigh, and (for some patients, more importantly) by smoothing away the bumps, waves, and jiggles that come with most cases of saddlebags. These bumps and waves are fat cells beneath the skin. By freezing and eliminating the outer thigh’s fat cells, the bumps and waves are the first to go as soon as results start to show.

Is CoolSculpting Effective for Saddlebags?

Very much so. Cryolipolysis or CoolSculpting has been found to treat saddlebags in patients who could not lose it with diet or exercise. In one study, researchers found CoolSculpting to be the most effective treatment for saddlebag reduction.

On average, women treated with CoolSculpting for the saddlebags can expect to lose two inches from the circumference of their thigh, which is most heavily influenced by subcutaneous fat.

Researchers also found that patients going through cryolipolysis for their outer thighs reported a pain score of two or less, with just 8% of patients experiencing short-term bruising on their thighs after the treatment.

90% of women who undergo CoolSculpting for saddlebags claim that they will recommend it to their friends and family, while over 80% of women go on to have CoolSculpting performed on another part of the body, such as love handles and the abdomen.

As it is a non-invasive cosmetic treatment, the CoolSculpting procedure is relatively simple and involves just a few major steps:

Experience CoolSculpting For Your Saddlebags and More at Ethos Spa

If you would like to learn more about CoolSculpting for saddlebags or would like a consultation for your next potential saddlebag CoolSculpting treatment, contact us at Ethos Spa Skin and Laser Center today. We are one of the most trusted providers of CoolSculpting and many other cosmetic treatments in New Jersey, and have served countless patients with results they can’t live without.

Contact our expert team today and find out how we can make you love your body more than you already do. With CoolSculpting, your saddlebags will be a thing of the past.